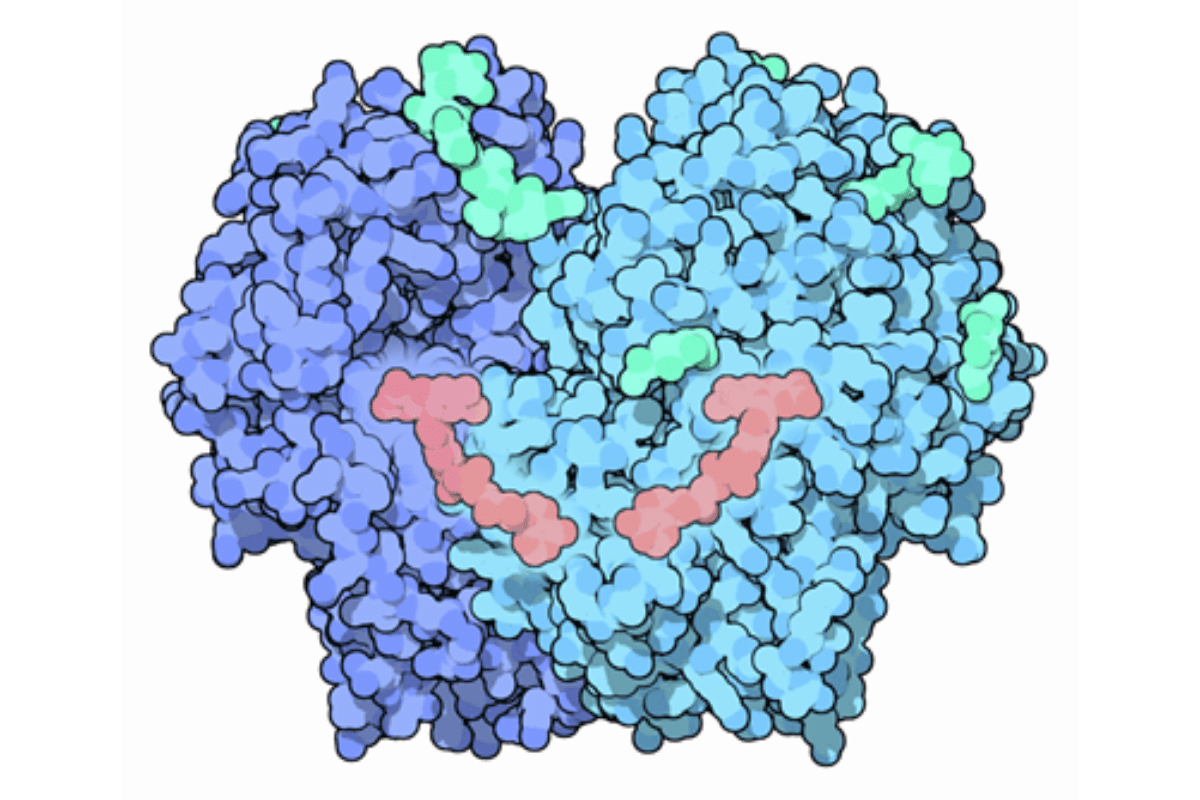 Using GlycoSeLect RPL products to enable the isolation and identification of key protein glucose oxidase in a variety of applications.

In this new blog series, we will introduce the different type of RPLs and their key glycoprotein targets.

The first chapter will focus on the mannose-specific Man-2 and alpha-Man, which compete against the plant lectins GNL (Galanthus nivalis lectin) and NPL (Narcissus pseudonarcissus lectin). These RPLs’ glycoprotein standard is the enzyme glucose oxidase.

Glucose oxidase is a dimeric protein consisting of two identical subunits. Each monomer folds into two domains: one domain binds to the substrate, beta-D-glucose, while the other domain binds non-covalently to a cofactor, flavin adenine dinucleotide (FAD), which it uses as a powerful oxidizing agent.

This glycoprotein is widely used for the determination of free glucose in body fluids (medical testing), in vegetal raw material and in the food industry. It also has many applications in the fields of biotechnology, biochemistry and nanotechnology. Some of its current applications in the industry are described below.

Glucose oxidase-based biosensors are being developed as an alternative to measuring blood glucose levels. Biosensors track the number of electrons that pass through the enzyme by connecting it to an electrode and measuring the resultant charge. Alternatively, some biosensors use sensitive fluorescence measurements, monitoring changes in the intrinsic FAD fluorescence of glucose oxidase. Biosensors are more reliable, rapid, and accurate than traditional senses, besides being compact and easier to use.

Biofuel cells can convert biochemical energy into electrical energy using a biocatalyst. One type of biofuel cell uses enzymes as a biocatalyst. For example, glucose oxidase and microperoxidase-8 can be used on the cathode, where the hydrogen peroxide produced by glucose oxidase acts to oxidize microperoxidase-8 to directly accept electrons from the carbon rod electrode.

Due to the wide availability of fuel sources and the moderate operational conditions, biofuel cells are promising for multiple applications, such as renewable energy generation, wastewater treatment, and power sources for remote devices.

Glucose oxidase has been used successfully for the removal of residual glucose and oxygen in foods and beverages to prolong their shelf life. The hydrogen peroxide produced by the enzyme acts as a good bactericide, and can later be removed using a second enzyme, catalase, that converts hydrogen peroxide to oxygen and water. For example, glucose is removed from egg whites before they are dried for use in the baking industry, using the glucose oxidase/catalase system.

Glucose oxidase can also be used to remove oxygen from the top of bottled beverages before they are sealed. In addition, glucose oxidase is used to prevent colour and flavour loss from foods and beverages. This is particularly useful for reducing the discolouration occurring in wines and mayonnaises.

In addition, the enzyme can inhibit wine spoilage through its bactericidal effect on acetic acid bacteria and lactic acid bacteria during the fermentation process. The bactericidal effect of the enzyme means fewer preservatives need to be added to the wine. Some strains of Saccharomyces cerevisiae have been genetically engineered to carry the glucose oxidase gene itself.

Glucose oxidase, as well as lactoperoxidase, can be used as anti-microbial agents in oral care products. The oral cavity houses several species of Streptococci bacteria, such as Streptococcus mutans, which is a significant contributor to tooth decay and is carried by everyone. The hydrogen peroxide produced by glucose oxidase acts as a useful bactericide.

Gluconic acid has been used as a food additive to act as an acidity regulator, in sterilization solution or bleaching in food manufacturing, and as a salt in chemical components for medication. It has even been used in the construction industry as an additive to cement to increase its resistance and stability under extreme weather conditions.

It occurs naturally in honey, fruit, and wine. This acid can be produced by the hydrolysis of D-glucono-1,5-lactone, the end-product of glucose oxidase catalysis.

The process of glycosylation hinders or stops the recognition of proteins. RPLs help in the removal of the sugars, such as mannose or fructose, so that the proteins can be identified and targeted. Man-2 and alpha-Man RPLs target terminal mannose linkages and help to identify the glycoprotein glucose oxidase in the various applications described above.

Lately, more attention has been directed towards protein glycosylation due to its association with various congenital, metabolic, neurodegenerative and immune diseases, and cancer. This drives the need for a more in-depth understanding of glycosylation, and RPL’s facilitate this understanding by enabling the use of glycoproteins in various further applications and tests.

Thank you for taking the time to read this article. Please stay tuned for further chapters in this series. If you have any questions or would like to know more about GlycoSeLect’s products, please feel free to reach out to us through our Contact us page, follow us on Twitter or LinkedIn, and explore our range of products here.

Until the next chapter. 👋

GlycoSeLect Ltd develops innovative technologies for the analysis, characterisation and purification of biopharmaceuticals. These next-generation products are highly specific for glycan structures improving product development and improving the cost-efficiency of their manufacturing. GlycoSeLect specialises in the development of proteins based on recombinant prokaryotic lectins RPLs. Our RPL products advance efficient detection, analysis and selective isolation of glycosylated pharmaceutical products. GlycoSeLect’s family of RPLs products are associated with market-leading properties, including high affinity for glycan targets, high sensitivity of detection, high stability and robustness in process development.